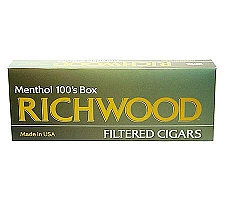 Richwood is a popular brand of cigars made by Tantus Tobacco. Tantus is a Kentucky-based cigar and cigarette maker that only uses the highest-quality Kentucky tobacco and blends. Its facility in Russell Springs uses state-of-the-art technology, including a climate-controlled warehouse, which is a main reason why Richwood cigars have superior aroma to brands that use similar tobacco.

Richwood cigars are arguably Tantus Tobacco’s most successful and recognizable tobacco product. Richwood cigars, which are 100-percent made in Kentucky using Kentucky tobacco and materials, are grooved, filtered cigarillos intended for leisurely enjoyment. The grooves allow the cigar to burn more intensely and evenly, and the filters allow for a smooth smoke despite the robust aroma.

The other five varieties of Richwoods are flavored versions of the original brand. These flavored options include Grape, Wild Cherry, Peach, Strawberry and Vanilla. The Wild Cherry is one of the most popular cherry-flavored cigarillos on the market, and Vanilla is a popular option for its great ambiance. Tantus Tobacco has been so successful with these cigars that it intends to release new flavors soon.

Like many filtered cigars on the market today, Richwoods are experiencing a tremendous amount of success. Historically, cigars and cigarillos have been a lot less popular than cigarettes, but current political, social and economic conditions are changing that. A benefit that a filtered cigar has is that it’s not currently classified at the same tax level that cigarettes are. That relative inexpensiveness is why options like Mild and Vanilla have become so popular with cigarette smokers.

Price is important, but the primary reason why Richwood cigars are among the most popular filtered cigars on the market is because they taste great, have fantastic aroma and burn long and evenly. Through the unique Richwood filter design, the cigar can provide the robustness of a traditional cigar but the smoothness of a cigarette or cigarillo. The filter is also a very popular feature among non-inhalers because it significantly reduces one of the chief health concerns related to smoking cigars.

Copyright 2010-2021, THE SALE OF TOBACCO PRODUCTS TO PERSONS UNDER THE AGE OF 21 IS AGAINST FLORIDA LAW. PROOF OF AGE IS REQUIRED FOR PURCHASE. Cheaplittlecigars.com does not sell Cigarettes or Pipe Tobacco. This website and its use is intended for people over the age of 18. This site and its content is intended for people over the legal smoking age. By Purchasing from our site you are agreeing to an Age Verification. Prices Subject to change without notice. We reserve the right to limit quantities. Customers are responsible for their State and or Local States Taxes. We sell Cigars, Filtered Cigars, Premium Discount Cigars & Cigarillos.